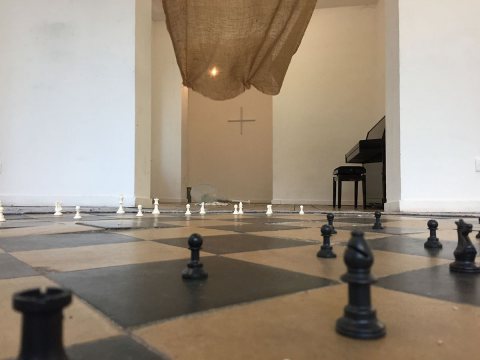 "New Geographies", a chess tournament -with some peculiar rules- as a collective performance will be scheduled during the exhibition. To play a match you can enroll at goo.gl/HbGt12 or send an email to ">

Where you come from, why you come from? is the result of a two weeks residency of the artists Giammarco Cugusi and Alessio Mazzaro. Both Italian and based in Brussels, they met in Venice and alongside their own research and practice, have already worked together on the piece 27metricubi, an itinerant public space installation .

Alessio Mazzaro is a multidisciplinary artist and storyteller who works mainly with performance, sound and space installation. He has travelled and worked in many different countries and museums, and has attended residencies in Paris, Casablanca and Bristol. His practice delves into cultural issues and memories, questioning the condition of becoming a collective. He has recently re-published the Edinost, the first Slovenian anti-fascist newspaper published in Trieste until 1928.

Giammarco Cugusi works within the mediums of installation, video and performance. He studied performance at Kask in Ghent and since then he has been exhibiting in Brussels, Ghent, Rome and Palermo. He also collaborates with the artistic collective and editorial project X-Rivista.

Mazzaro and Cugusi ’s research focuses on similar fields of interest, but is, however, characterized by a different approach and point of view from each artist.
Mazarro’s research within testimony and identity focuses on the “others”.
His work tries to document something that does not belong to him or his culture in an attempt to position himself as a neutral witness and reporter.
Cugusi on the other hand carries out his research on cultural identities through the filters of his own and personal background. In opposition with, Mazzaro, he questions the idea of belonging and puts himself in relation as well as in opposition with different cultures and identities.

For this residency Mazzaro and Cugusi worked together in the space, trying to present their work through the defragmentation and interrelation of their pieces in the space, trying to engage in a dialogue with each other.
Playful and political at the same time they both invite the public to walk though a deconstructed space, witnessing different stories and testimonies. Belonging and appearance, proximity and distance, identity and culture are a few of the topics of these occupations, in an attempt to define a possible identity through our sense of belonging to a space where we come from or the lack of it.