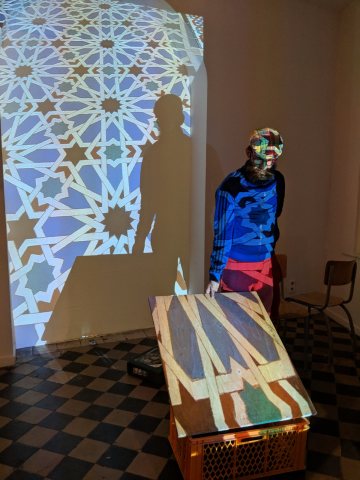 Objective
To experiment in various media means of recording the physicality of traditional flamenco dance as a step toward expressing flamenco in visual arts – the documentation of tangible steps and movements as a tool, a foundation from which to present the intangible quality of duende, the heightened state of emotion, expression, and passion at the heart of flamenco.  The art lab residency will consist in large part of a series of experiments in these and other media as the first steps for later paintings and other two- and three-dimensional works that expand upon frozen moments, gestures, and moods.

Background
In 2017 José Manuel Cartdoso began a series of large scale abstract paintings of flamenco styles or palos (or cantes), using flamenco dancers from Louisville, Kentucky to which he had recently moved.  He had the dancers perform steps of alegrías and bulerías and other classic flamenco styles, painting directly with their feet, their shoes acting as paint brushes. From this skeletal outline he enhanced the steps to build a sense of movement, punctuating the effect by built up areas of impasto to “record the elusive” and attempt to capture the memory and feeling of the dance, its force, its mood, its motion.

Program
At ZSenne Art Lab, Cartdoso will experiment with new media for recording these physical steps as a step for visual interpretation. Testing the properties of materials such as wax, modeling clay, plaster, cement, silicone, copper and metal sheeting, and coated and tint impregnated papers, he will experiment in building upwards from the cold two-dimensional “fossils” of dance steps to something more fluid and dimensional and alive.
A professional flamenco dancer in Brussels has agreed to participate in the casting and recording experiments, searching for the media which best convey not just the physical steps but something of the effect and expression of the movement and feeling of flamenco.

Outreach
The residency will be open to visitors regularly: to see discuss the project and physical products of the recordation experiments as they continue.

Ongoing/Future
Beyond the residency at ZSenne, Cartdoso wants to carry on the project elsewhere, in Spain and in other outposts of the flamenco diaspora, continuing to research past efforts at recordation attempts and hoping to experiment with new technologies such as a prototype for motion-sensor equipped shoes developed by a Spanish graphic designer and dance enthusiast.