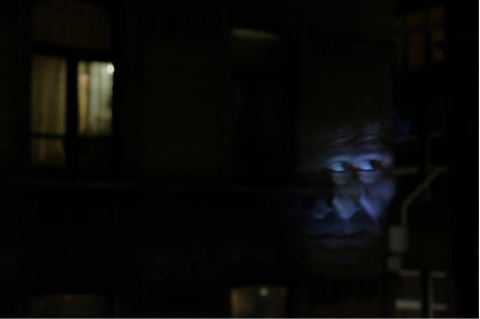 Two strangers, a man and a woman, live the same neighbourhood.
It looks like they have nothing in common, but they keep gazing at the each other’s from their own windows. What do they think the other is looking at and why?

URBAN CRIMES
It is a project has the aim of creating a dynamic in the neighbourhood to make people meet and exchange, get to know each other’s and laugh about the prejudges which we all carry in our gaze.

The project wants to stimulate a reflection and empowering people by becoming conscious of some schemes trough which we judge. Audio-Visual art and humour will be the main tools to do that. Urban crimes is also a series of short films dedicated to prejudges. Prejudges kill, so the genre chosen for these short stories is thriller.

Through the big window of ZSenne Art gallery the passers-by will be able to see a short movie about a crime that is about to happen.
The movie will be cut before the end in order to create a suspense about the conclusion of the crime.
ZSenne’s gallery will be set-up as a fictional police station where an investigation is going on.

The artists will put in place different strategies to involve the passers-by and the inhabitants of the neighbourhood and invite them to talk about themselves, give a sort of self-portrait. They will be photographed by the artists.
They will quit the space leaving their phone or email to be invited for the Identity revelation’s day which will happened few days later. The written self-portrait and the picture will be printed and create a visual installation in the space of the gallery/station.

An event will be organised: Identity revelation’s day. All the participants will be invited. The film will be screened in loop again, but this time the end will be revealed. The participant will be invited to choose a picture and verbally share to the others, who she/he imagine the persons in the picture is. After that, the person just described will reveal her/his identity by reading hers/his self-portrait out laud.

The artists will create a frame to play with possible narratives of crimes around the eventual misunderstanding between projection and self-perception. The stories and the interactions among the participants, will be the base for new short films’ scenarios that will constitute the series of URBAN CRIMES.