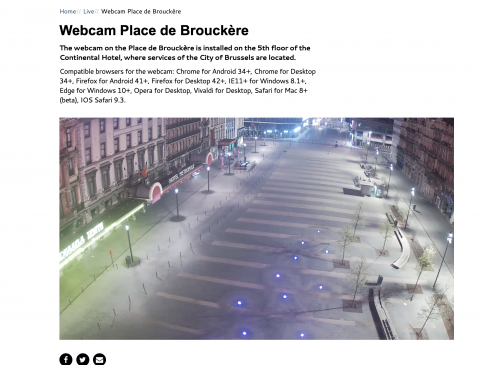 There exists a webcam which is streaming from Place De Brouckère in Brussels, live, 7/24:
http://www.brussels.be/webcam-place-de-brouckere
We consider this moving image as a live performance taking place in public space both online and offline. Our proposition for Day of The Dance 2021 which occurs on April 24, is a framing of this performance in three ways:
1. Watching performers moving along the virtual frame:
From 12h00 to 17h00 there will be two performers present in the physical space of Place De Brouckère. They will move on the edges of the frame of the online webcam image which are lines of increased tension where people, animals, cars, bicycles, other machines and other beings, fall in and out of the virtual image. This performance can be viewed through your own screen (smart phone, tablet, computer, etc.). You can do so from any location with an internet connection or come to Place De Brouckère and watch the virtual performance and the physical performance in hybrid mode. We also invite you to join us at Zsenne Art Laboratory where we will set up a large screen on which we will add at times some extra visual effects through the open source computer program OBS (Open Broadcasting Studio). Furthermore, watching a performance together (according to Covid 19 measurements of course) also helps to constitute it as such.

2. Invitation to participate in the performance by moving in, out and along the virtual frame yourself:
The performers in Place De Brouckère will also facilitate the participation of audience members who wish to join the performance actively. They will invite you to choreograph your own aesthetic intervention with the frame of the webcam image and offer you some guidelines from our own experience, on how to do so. All you need to do is go to Place De Brouckère between 12h00 and 17h00 and there will be waiting for you the guidelines both written and explained in person by our facilitators. Your performance can be recorded by our team and sent to you later via WeTransfer.

3. Invitation to remotely choreograph our performers in Place De Brouckère:
You are invited to come to Zsenne Art Laboratory where we will set up a comfortable station from which you can direct our performers in Place De Brouckère to execute an emergent choreography that comes to your mind at that moment. They will function as your avatars and you will be able to see the result of your instructions to them with a 60 seconds delay that happens between the moment that they actually move in the physical space and when we see that movement appear in the live feed of the webcam image. While talking to them on the phone, they might tell you where they actually are, which will be a prediction of the future of what you see on the screen. As such, the 60 seconds delay creates a wonderful confusion of past, present and future times.

By Irina Lavrinovic and Asher Lev
Performers\facilitators: Sophie Melis, Estelle Bibbo and Mikko Hyvönen.
This project happening within the frame of Day of The Dance 2021 is hosted and supported by Zsenne Art Lab, Brussels and Theonlineschoolofperformance. It was partially developed during a recent residency of Irina and Asher at Kaaitheater (Kaaistudios), Brussels.