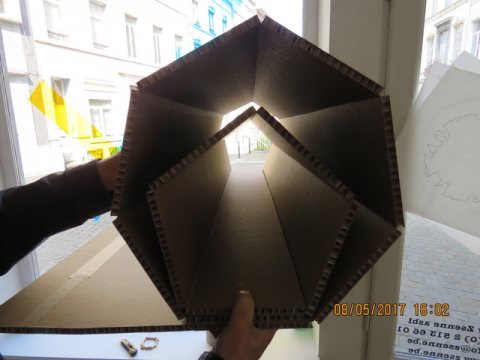 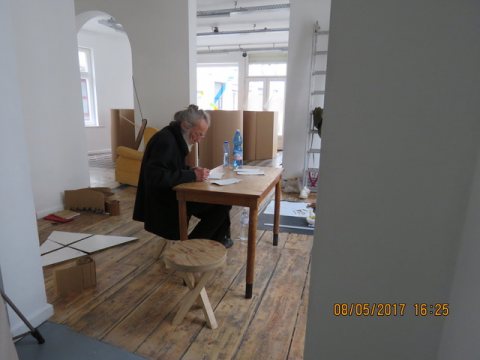 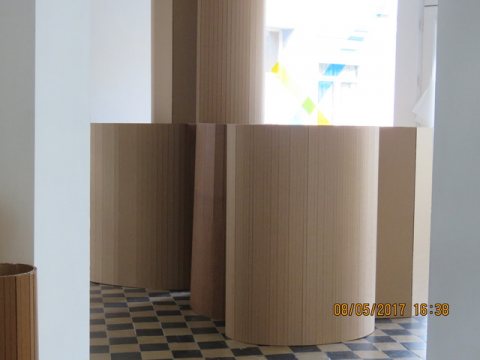 THREE is for me, you, them. FOUR is FOR - us. FOURfold. FOR - fold. A column, dwelling, totem, pathway. It is a gift - to pack, unpack, repack. It is a spiral cube, a volume to unfold over the foldable surface. A square surrounded by a circle - a sphere made of visible voices. Light matter.


In the work of Meryem Bayram an unfolding relation between a human behavior and a constructed spatial environment is a central driving force. With substances such as wood, cardboard and elastics, she creates installations that are tracing and reshaping outlines of a physical space and in a same gesture, are challenging living bodies to inhabit and transform that space. By proposing specific encounters between the body and material, she shapes and organizes tensions between the visible and invisible, composed and improvised, proliferating connectionpoints while constantly reinventing new obstacles.

Just as in the previous creation - Autonomous Scenography (2014) - “Fourfold” resists to a fixed narrative or a singular conceptual frame. It is instead, first and foremost, a living encounter between Meryem and visual artist Guy Rombouts (1949, Antwerp). In this encounter her proposition of a space will be given as a gift to the body of the fellow artist . Guy`s response to it, his “unpacking¨of Meryem`s spatial gift will generate a core of the “Fourfold” event. Around the edges of it, Meryem will continue working, adding and subtracting material and immaterial elements to the unfolding space - objects, vocal interventions, light and sound cues. Those improvised yet clearly defined fragments will be introduced into the performance as a generative power through which the initial meeting between her and Guy will be continuously renewed.

The light design for the “Fourfold” will be developed by visual artist Pol Matthé.