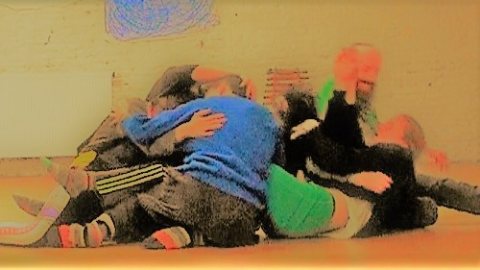 Throughout history, the spiral has made many prominent appearances in human culture. It is a fact of nature and a sensed and perceived potential within the human body, closely related to the flow and energy of consciousness. So what is it about spiral that inspires?

As part of her Master studies at KASK, Gent, Irina Lavrinovic invites you to witness a practice in which a collection of bodies attempt to tune in together to an ambiguous energy of a spiral. In this practice the performers must empty their bodies and minds of all personal desire in order to be able to listen to a collective spiral, its shape, direction, frequency and infinite other qualities, yet unknown to them. It begins by the group coming together in space, where bodies are touching each other as they form a kind of human clump. The first thing they do is nothing. They remain still and sense each other, becoming increasingly aware of the collective body. Once this awareness is established and the senses are sharpened, inevitably, a movement starts to appear. No one starts it, but all listen to it and observe. They observe how this collective body is moved to change its form by and through the spiral. To be in flow with the ever happening change then, is to be the change itself. To be the change can mean to initiate change. To be the change can also mean to follow the change. In the end, between initiating and following there is no big difference since both are active elements in the processes of formation.

After this presentation we will have a short collective discussion about the seen and the perceived.
With: Irina Lavrinovic and Asher lev

On April 20, Irina and Asher will hold an 8 hour experiment of nonsensical speech utterance at SZenne Art Lab. They will both ‘speak in tongues’ from 12:00 noon until 20:00 at night continuously. The intention of this act is an attempt to decolonize the head space from the ongoing chatter of the mind. They will materialize each and every present thought, feeling and sensation into a glossolalia, forming a soundscape that fills physical and mental spaces.
You are warmly invited to visit SZenne Art lab during these 8 hours, either to witness the [experiment] or to join it yourself, if you would have such a desire and intention to do so. It is also possible to support the space by dancing or playing a musical instrument you would bring with you.
According to Terence McKenna, the development of human languages began with an eruption of nonsensical speech under states of trance and ecstasy. During these 8 hours at ZSenne Art Lab, Irina and Asher will reverberate that moment of language eruption in human history.